Recently, a homeowner asked us to perform a swimming pool leak detection in Northridge. 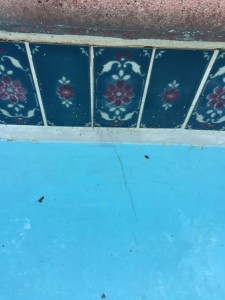 The homeowner said that their pool was losing approximately 1 inch of water on a weekly basis and stated they had also had a previous repair structural crack repair performed with epoxy some time ago.  We arrived at the house and immediately went to work.  We tested everything including the skimmer, return lines, main drain, light night and conduit.  We located the leak in the return trunkline.  We marked the deck at the location and provided the customer with an estimate for the repair.  The homeowner contracted us to perform the repair and a date was scheduled.

The repair was performed as scheduled and the homeowner was very pleased with the results.  We thought this was the end of this pool leak, but we received a call from the same homeowner a few weeks later saying that their pool was now losing approximately 4 inches of water on a weekly basis.  This raised a flag for us and we made it a priority to get back to the location immediately.  We arrived at the location a day later to find out what was going on.  We immediately checked our work and everything was holding so we continued to perform the same leak detection in Northridge again.  No leaks at the other return lines, skimmer, skimmer suction, equalizer line, light niche and conduit.  What we found was a structural crack approximately 6 feet in length which was leaking.  The structural crack was not present when we performed the original leak detection nor was it present when we performed the original repair.  The homeowner was present with us when we performed the original leak detection as well as the repair and saw that there were no structural cracks present at those particular times.  Unfortunately, small underground tremors made their way to the pool structure in Northridge.

Earthquakes are something that humans are unable to control and unfortunately, there is no way to prevent swimming pool structures from cracking if the earth moves.  This homeowner understood and we left them in good graces with an estimate to repair the structural cracks using the Torque Lock repair method.  If you look closely at the picture, you can see the structural crack running from the tile down into the pool in Northridge.