Just before the Thanksgiving Holiday, we were asked to perform a swimming pool leak detection in Woodland Hills.

The customer was very concerned as the pool was losing water in a short period of time.  An appointment was made.  When we arrived, we saw the hose was in the pool and the water was running to fill the pool.  Unfortunately, the homeowner was struggling to fill the pool.  Although there were many structural cracks visible in the pool, we did not make any immediate presumptions and immediately got to testing everything.  Even though the water level was not at the proper height, we assured the homeowner we were able to test the skimmer and suction line without water flowing in it.  We performed a pressure test on the skimmer suction line, no leaks.  We continued to test the main drain line, return lines, light niche and conduit.  Again no leaks detected.

We explained to the homeowner that epoxy was not the best choice for the repair.  There was an excessive amount of structural cracks which needed to be stabilized. 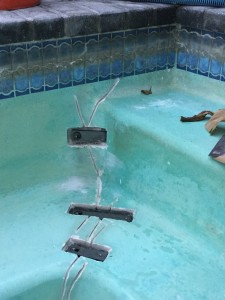 Epoxy is not able to stabilize a structural crack, it basically acts like glue.  The homeowner asked the prior company if there was a better method of repair prior to performing the repair with epoxy.  The previous company misinformed him by saying that due to the various locations of the structural cracks, epoxy was the best method.  This was not the case.

When the homeowner called us to schedule the repair, he told Celia, the Office Manager that he did his homework and was quite impressed with what he was able to find out about the performance of the Torque Lock staple.  He said it also raised his curiosity when he compared other methods of structural repair and saw the failure rate compared to the Torque Lock Method.